Cryptocurrency, or crypto as it is often referred to, is the answer to a long standing problem with finance and money.

What problem? you ask. I’ve got no problem with money at all today apart from not having enough of it.

But the matter of fact is you do have problem with it. You do, I do and everyone else does but we’ve become so accustomed to ‘that’s the way it’s always been done’ that we’ve become blind to its flaws. In order to understand the value proposition of cryptocurrencies, we first need to understand these specific problems they solve.

The first half of this article addresses the multiple failures of money today, while the second half explains how cryptocurrencies address these issues and rectify them. This series of articles is intended to beginners with zero knowledge of economics, finance and crypto. If you come from a financial or banking background, you may opt to go directly to Part 2, or check out my other articles on Bitcoin, Ethereum and ICOs.

In the absence of the gold standard, there is no way to protect savings from confiscation through inflation. There is no safe store of value.
— Alan Greenspan, Chairman of US Federal Reserve, 1987–2006

Modern finance is broken. Just ask any banker you know if he understands where does the currency of his country get its value from. The US dollar, the ‘gold standard’ of foreign currency holdings, used to be pegged to actual gold bullion held by the US Treasury; there was an underlying asset that was tied to its value. However, in 1971, the relationship between gold and the US dollar, was cut. Interestingly enough since the metaphorical divorce of gold and US dollar value, both assets have had an inverse relationship. Keep this in mind, it’s an important point that we will revisit later in Part 2. 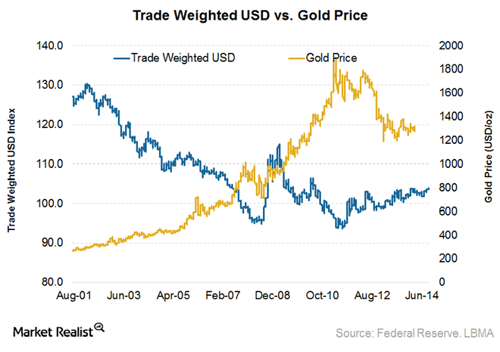 Inverse relationship between gold and US

What’s obviously frightening however, is the fact is that the entirety of the finance industry runs on the assumptions of price, of supply and demand, and not of intrinsic value. So, where does currency get its value from? This article by Chris Mayer covers it quite succinctly: tax credit. Governments are unable to fund their spending with tax revenue alone, so they print more money in order to make up for whatever shortfall they have.

However, if print money endlessly, you debase the value of your own currency by creating a never-ending increase in supply, thereby driving the price down. There’s nothing stopping the citizens, businesses and forex traders from selling off your useless currency in exchange for something that would serve as a better store of value e.g. necessities or commodities or even other currencies, and trading with that.

We don’t have to look far for such examples: in third world countries like Cambodia or Vietnam, USD is widely accepted and even preferred by businesses despite each country having their own currencies of Riel and Dong respectively. Or in the past, when episodes of hyperinflation due to excessive money printing such as in the case of the German Weimar Republic, people turned to using American cigarettes as currency.

The U.S. government has a technology, called a printing press (or today, its electronic equivalent), that allows it to produce as many U.S. dollars as it wishes at no cost.
— Ben Bernanke, Chairman of US Federal Reserve 2006–2014

Thus, in order to ensure that citizens and businesses continue to use the local currency as legal tender, governments employ a trick. They demand payments for tax liabilities in the currency of their own country.

As taxation often scales proportionately to the amount of profits made by companies or individuals, it then makes sense to collect payment in that specific currency instead of turning to an alternative. Tax liabilities give currency value: All fiat money, or money issued by governments that do not possess an intrinsic value, essentially serve as tax credit.

That’s not all however, finance is more than just governments and the money they issue alone. Money cannot exist in a vacuum without an ecosystem of financial services. All this because, money must have some characteristics (in order to be considered money) which necessitate the existence of banks:

While we can accept that the dollar notes in our wallets are respectably durable, portable, divisible, uniform and accepted, we all know that it is not infinitely so.

After passing through sufficient hands, dollar bills will start to suffer wear and tear. There’s a limit to how many dollar bills you can bring to you on a trip out to the market or to take an extreme example, buy a house. There’s a limit to how many merchants are going to be willing to accept 100 pennies as a dollar regardless of their equal value. Due to reprints and different minting years, not all dollar bills are going to look alike and last but not least, if you have had experience with US 2 dollar bills, UK 50 pound bills, or 500 Euro bills, you’d know universal acceptability is not true, let alone using your home currency in another country.

Hence, the only way we can actually use large, specific amounts of money easily, yet allow it to universally accepted and transacted in is to have a trusted storage provider who can offer credit and debit services.

In other words: Banks.

Banks act as trusted storage providers who provide us other services such as providing credit notes or direct debit to suppliers of goods and services. They enable us to store large amounts of money that we would be physically unable or would be unreasonably difficult to store ourselves. Without worry of the them ever running away with our money, right?

It is not from the benevolence of the butcher, the brewer, or the baker that we expect our dinner, but from their regard to their own interest.
— Adam Smith

Well, if it only that simple. The truth is that purely currency storing services did not exist except in the Roman empire; monasteries, nunneries and temples offered storage services for money and valuables in times of war. The original type of banks evolved mainly from money lenders who required funds to run their businesses or government official providing land to their serfs for farming. Lending and banking have been intertwined since their conception.

In other words, banks won’t charge you for the amount of money you store with them because that would decrease your overall savings over time which is exactly what you’re trying to avoid. Instead, they’d even offer you interest to keep your funds with them, on the premise that you need to trust them to secure your funds, knowing that they are going to conduct loans with your money. Thus, as profit maximising entities, the entire aim of banks is to make money off your money. How? By creating new money.

Wait! That doesn’t make any sense! Only governments can create new money!

Well, yes and no. The way banks create money is not via printing, the way they create money is via debt. Loans don’t exist in a vacuum; unless they’re from family or friends, loans most likely have an interest element to them. By storing money in a bank, you are as well, providing the bank a loan. One that is of unknown duration to the bank, as you may withdraw your money at any time. This is the rationale given for lower interest rates on savings accounts vs loans as loans from banks to businesses or individuals have some kind of clause built in for a maximum repayment period. Interest on loans is a form of money creation, as the loans themselves can be packaged into different financial instruments and resold, creating money where it did not exist in the first place; this was exactly what happened in the 2008 Subprime Mortgage Crisis.

Speaking of which, we have seen time and time again we cannot trust banks: The 1997 Asian Financial Crisis, the 2001 Dotcom Bubble and most recently, as mentioned above, the 2008 Subprime Mortgage Crisis which directly led to the 2010 European Sovereign Debt Crisis. Each time caused by banks and the financial industry abusing the trust we place in them. Yet when dealing with fiat currency, we have no choice but to use banks, because no other institution is so firmly entrenched in the worldwide economy.

Let me end my talk by abusing slightly my status as an official representative of the Federal Reserve System. I would like to say to Milton and Anna: Regarding the Great Depression. You’re right, we did it. We’re very sorry. But thanks to you, we won’t do it again.
— Ben Bernanke, in reference to Milton Friedman

In summary: Governments and banks, cannot be trusted to not debase money, because they have done and will continue to do that.

So how do we solve this crazy problem problem? Stop using money entirely and trade in cows and horses like people did in the past?

In 2008, a pseudonymous cryptography researcher known only to the world as Satoshi Nakamoto, came up with an answer to that problem. That answer, was Bitcoin.

If you are interested in working in this exciting emerging industry have a look at our vacancies HERE or contact neil@cryptorecruit.com

Want to work at Cryptorecruit - Why wouldn't you

How you can spend Bitcoin?

5 Myths About Hiring for Blockchain & Cryptocurrency